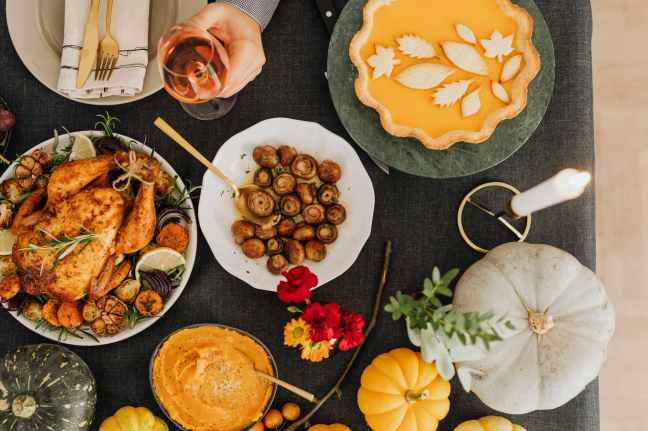 Well everyone, it’s the end of September, time to wake up.

In Canada, Thanksgiving is in October (oh and we did it first, do I want to do a history lesson here? Yeah let’s do it.) First Nations across Turtle Island held thanks giving celebrations for time immemorial to celebrate harvests and hunts. It actually makes perfect sense for the timing, now that I have learned that we are currently right in the middle of many Nations’ hunting weeks. That’s when communities essentially shut down, school gets let out, and people head out onto the land to hunt their meat for the winter. So now our Thanksgiving takes place the second Monday of October which would be right after the Indigenous peoples’ hunting season largely wraps up. In terms of European settlers celebrating Thanksgiving, legend has it that Martin Frobisher and his crew toasted and celebrated in thanks for a safe passage to Newfoundland in Frobisher Bay, in what is now Nunavut in 1578. This puts the first Canadian Thanksgiving celebration forty-three years before the first American Thanksgiving in what is now Plymouth Plantation, Massachusetts. And cranberry sauce (my personal favourite) is descended from the Mi’kmaq and Samuel de Champlain’s men’s’ celebrations in the early 1600s, the Mi’kmaq introduced Champlain’s men to cranberries, which probably saved them from scurvy. Now, the turkey, pumpkins, pies, and sweet potatoes are transplants from the American version of the holiday.

I have spent a lot of Thanksgivings alone, nearly all of them since I was 18 and went to university, I did go home for a couple, but most of them since then I have either stayed at school to study (why is Thanksgiving always during midterms??) or worked and got that time and a half. Over the past few years I’ve been playing with different menus (after one particularly sad year at the Whole Foods hot bar in my scrubs)and there have been a few Friends-givings but never actually on the weekend; and I think I have finally cracked the code on making a Thanksgiving meal for one.

Now, the best part about making a holiday meal for yourself is equal parts slightly depressing and gluttonous. It is a free-pass to make whatever you want no matter the calories and with no one around you to judge you for what you eat or how much of it you eat. However, it also has to be balanced with the fact that not only are you cooking and eating alone, you are cleaning up alone. Also, I adore cranberry sauce, it is one of my absolute most favourite parts of the holidays. I love all things cranberry actually, but cranberry sauce is like crack. So my Thanksgiving will always include a cranberry something.

I also like to make the whole weekend special by planning a special breakfast on the Saturday, a movie marathon, and a hike on the Sunday (for clarity, Thanksgiving is on a Monday in Canada). For my breakfast this year I am 100% making Dan “Grossy” Pelosi’s Pumpkin Pie Coffee Cake and I’m planning on buying a milk frother, so that I can make lattes over the weekend (or maybe I’ll go on leisurely walks to the coffee shop on the Saturday, but they’re closed Sunday and will probably be closed on Thanksgiving Monday).

I don’t normally go for a starter, but I am wondering about these Half Baked Harvest, bacon-wrapped, goat cheese stuffed dates seem really, really good and boundary pushing for my normal recipes.

After that, in my mind there are two options for your Thanksgiving dinner (although I generally have mine at 3pm, so lunch?) You can stay traditional and go for the turkey, stuffing, potatoes, and carrots, or you can get eccentric and make something you wouldn’t normally make, maybe something more elaborate than normal, that isn’t a turkey dinner. For my non-traditional option I’m leaning towards this Butternut Squash with Brown Butter Ravioli recipe from Grossy Pelosi as well. Learning how to make pasta for Thanksgiving seems like the perfect amount of effort and extravagance for the day. However, this Thanksgiving Turkey Gumbo sounds absolutely divine, so as per usual we have competition between Tieghan and Dan for my recipe choices.

However, I love a turkey dinner, so for my traditional option I’m going to see if I can find a couple turkey breasts and roast them and honestly, I’m going to call my mom and ask her how to go about it. I know how she cooks a whole turkey, but she stuffs the insides of the turkey with oranges, lemons, and onions and obviously you can stuff a breast. Then for the sides, I’m thinking about this Stuffed Sausage and Apple Acorn Squash with roasted herbed carrots and parsnips (I’m using my mom’s recipe, but this one from New York Times Cooking looks really similar!) and my mom’s broccoli and rice casserole. Listen, this is filthy. It’s main ingredient is Cheez Whiz, this is not good for your arteries, but we only have it on Thanksgiving and it would not feel like Thanksgiving without it, this recipe seems the closest to hers. And then the cranberry sauce, I’m going to consider making my own (maybe this one?), but I am not too proud and genuinely enjoy the Ocean Spray canned cranberry sauce.

Next is the dessert, this is generally what I have for dinner, so my Thanksgiving dinner as a late lunch and then around dinnertime we have dessert. My mom always makes this Pumpkin Ginger Cheesecake, but it’s way too big for me to be able to eat it all before it goes bad. I’m wondering about Martha’s Pumpkin Bread Pudding with Dulce de Leche (I love bread pudding!) or this Hazlenut Chai Spice Cake with Browned Butter Glaze (and it would give me an excuse to buy a Bundt pan), I like them both because I don’t think they’re super typical Thanksgiving recipes.

And for drinks, I love a sour, a bourbon sour, a whisky sour, an amaretto sour, so this Cranberry Bourbon Sour is just my type and this Maple Bourbon Old-Fashioned is a super Canadian option.

Do you celebrate Thanksgiving? What do you do to celebrate it?